Campell Town is one of the many deprived communities in Waterloo, a major trading point in the Western Rural District of Sierra Leone. The community is served by only one stream for drinking water and other purposes. The stream is not easily accessible. There are no constructed roads or electricity in the community. During one of my many field visits to the community to assess school progress of the project beneficiaries residing in the community, I met Sahr Menjoh sleeping beside a basket of leafy vegetables on a bushy path leading to a nearby garden. I woke him up to ask if he was sick. He replied: “No, I am hungry and tired. Since yesterday my mum gave me only a piece of cake to eat. Today we went together to her garden and harvested these potato leaves which I am going to sell and use the money to buy two cups of rice and other ingredients needed to cook a meal for us. “

Sahr is a nine-year-old boy who lost his father at the age of three during the 2014 Ebola epidemic outbreak in Sierra leone that resulted in the loss of nearly 4,000 lives. After the death of his father, life became very difficult for the family. Relatives of his late father stigmatized his mother Neaka and later drove her from the house where they all resided. His mother could not take him along due to lack of a livelihood. An Uncle of Sahr adopted him, but was not able to pay school fees and buy other learning materials for him; so he dropped out of school.

Sahr was later identified and enrolled in school by the SLWT project in November 2014 but unfortunately the uncle who adopted him got sick and died in September 2020. Sahr then relocated to his mother in a more deprived settlement within Campbell Town community. 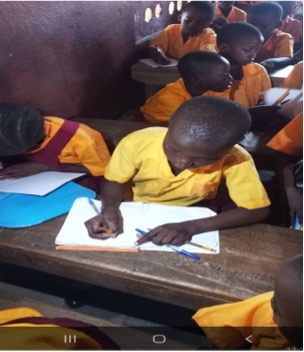 Sahr copying notes in one of the two books

During the general SLWT School Assessment of beneficiaries in October 2020, I was told that Sahr had no school bag, only two exercise books for all the eleven subjects taught in the school, was irregular in school and as a result failed his class four promotional examination.

I went to his home to find out more about the situation and asked his mother why Sahr is not punctual in school. She said “my source of income is the garden and Sahr is the only one who helps me to plough, plant, weed and water the crops. He does not study at home because he gets tired after helping me in the garden. On days that we harvest the crops, he takes them to the market to sell and subsequently misses school. I wished I had financial support, I will ensure that my son goes regularly to school and excel. I understand quite well the importance of education, but I cannot do otherwise.”

Sahr is currently attending the City of Light Primary School which is closer to home. During a visit in November 2020 the mother reported that Sahr pressures her to make sure he goes to school every day as he feels proud in his new uniform, shoes, and socks. She reported that he talks a lot about his new friends and that he is always showing her the correct ticks when he does his classwork correctly.